Find from an estate sale. Physical condition was not bad, so acquired it.

For those who are not familiar with this instrument, this is used to generate accurately timed pulses , or mix of multiple pulses to calibrate oscilloscope time base.

The typical restoration cycle of cleaning, recapping, and replacing bad tubes and troubleshooting. Most of it is covered in the video here, including some of the internal  signals. 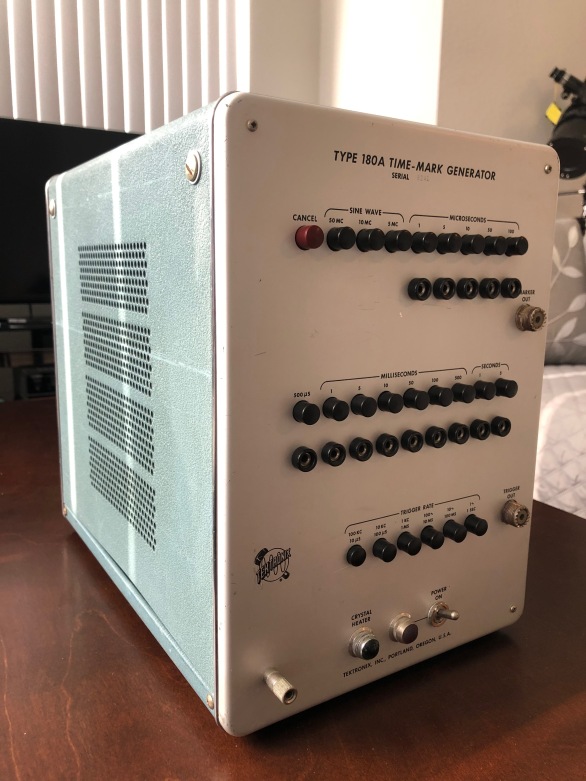 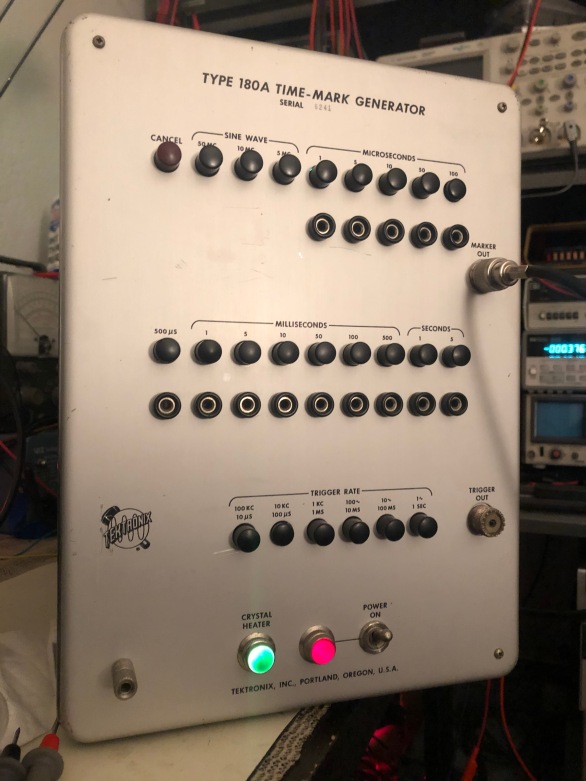 Detailed internal pictures and other references at

DO NOT ATTEMPT TO REPAIR/OPEN/OPERATE/FOLLOW  UNLESS YOU REALLY KNOW WHAT YOU ARE GETTING IN TO. THERE ARE DEADLY VOLTAGES INVOLVED AND IT CAN  KILL YOU.

THERE ARE BETTER WAYS TO DIE IF YOU ARE UP TO THAT.

Even if you are familiar with electronics, be very careful when you work on something like this.

Use test  instruments with right attenuation probes, example, 10:1 probes or HV probes,else you may fry your test instruments

Very simple instrument compared to the 500 series scopes. An over simplified block diagram will be something like this.  1MHz signal generated from the OCXO is the primary source. It is fed to cascaded frequency multipliers to get 5/10/50MHz sine output.

The same 1MHz is also fed to cascaded frequency dividers aka multi-vibrators to divide the frequency and generate marker pulses at various intervals. Front panel switches are used to mix outputs from various stages to the marker output connector. 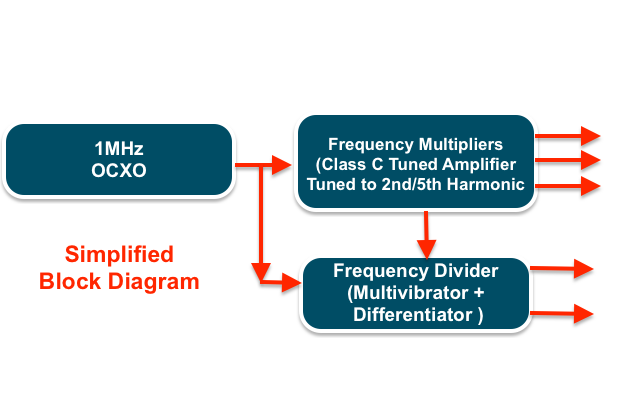 Here is the first section, where the internal reference frequency is generated from the OCXO at 1MHz, which is differentiated via C116 and  fed to a cathode follower 104A to get 1μS marker pulse. 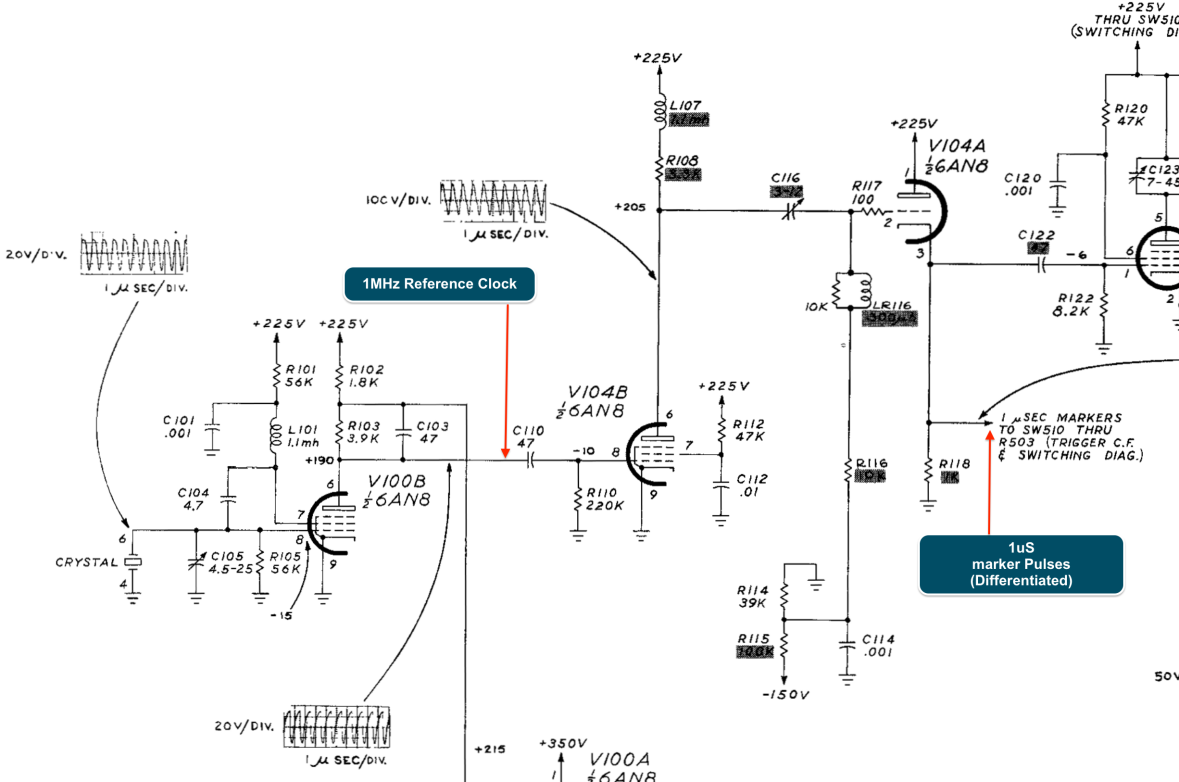 Here are the test points for the above signals. 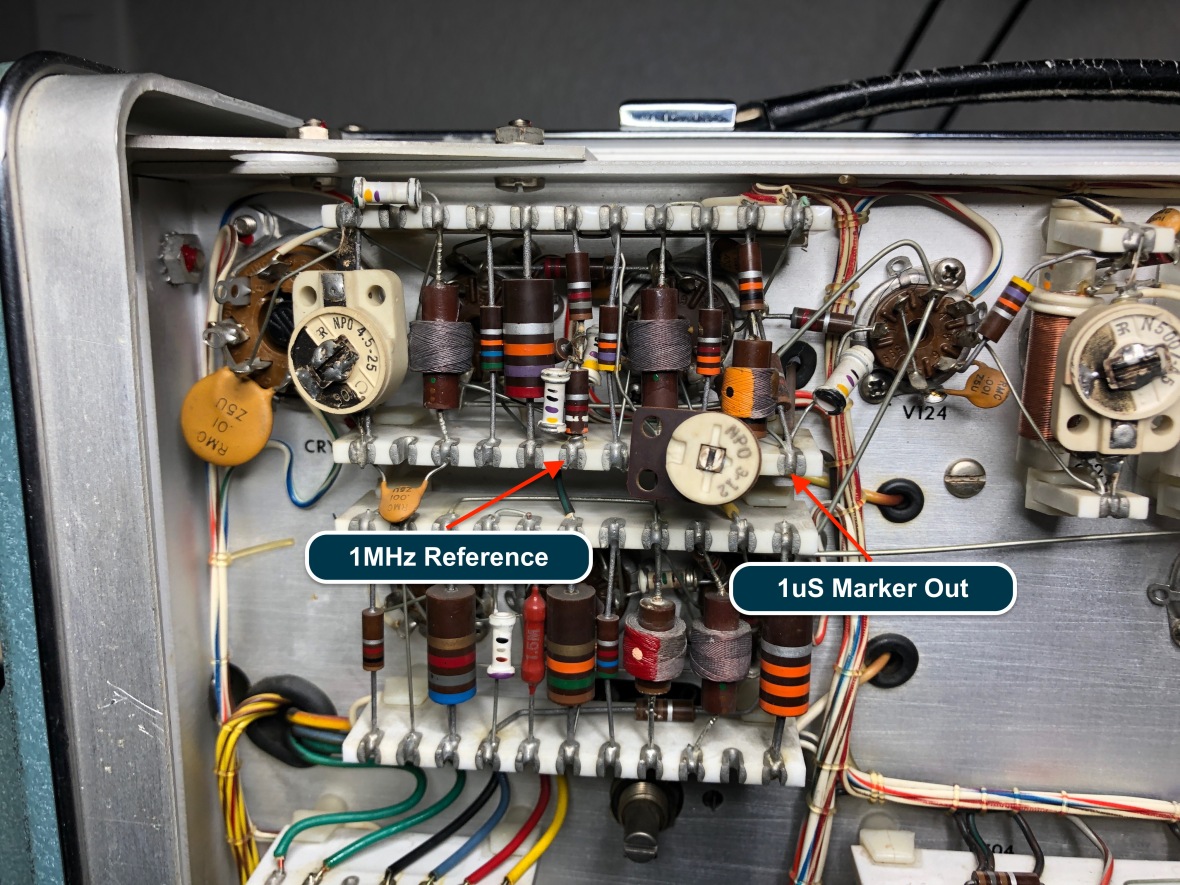 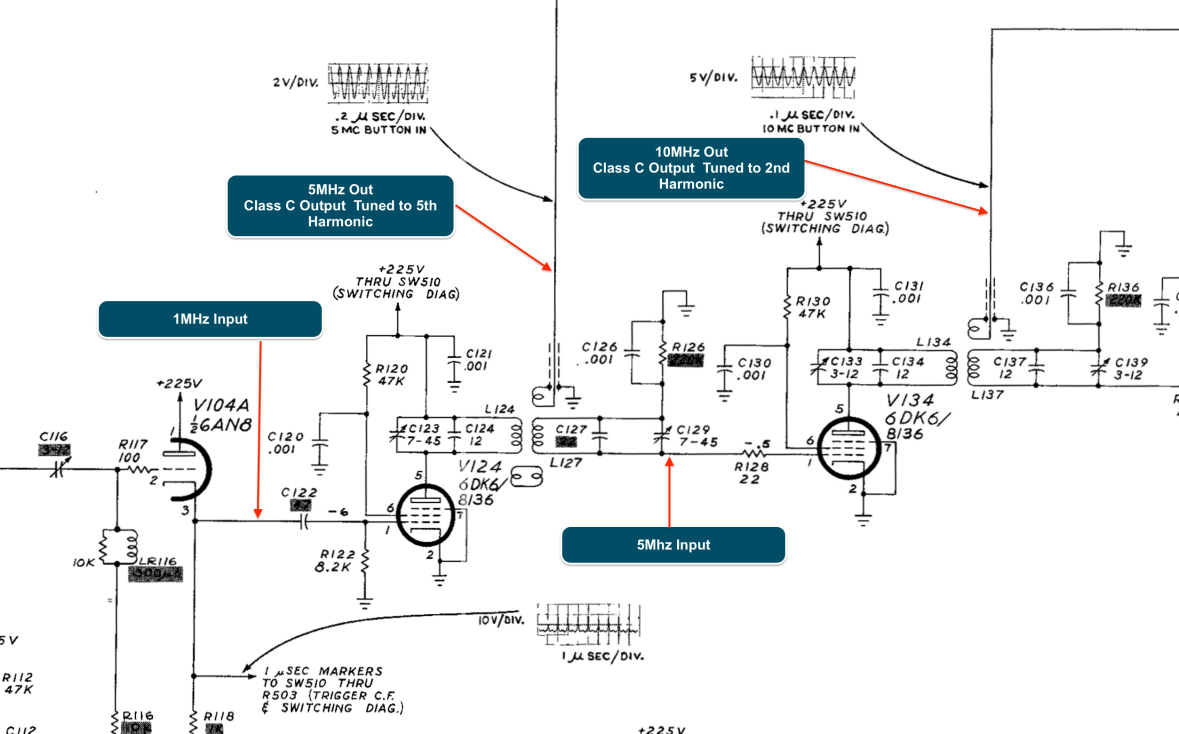 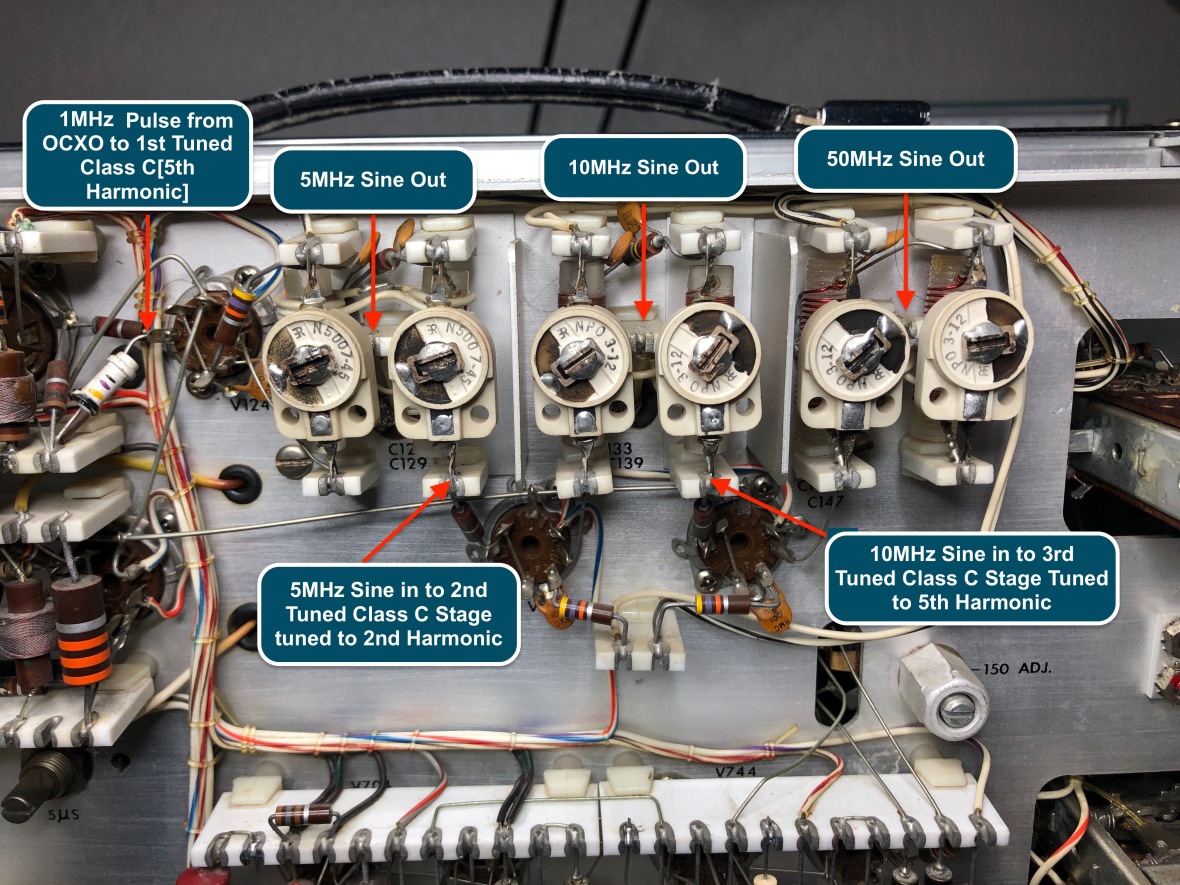 To get  pulses of higher time intervals, , a series of multi vibrators are used, each dividing the input pulse by two. You can see each one of them, total of 12. 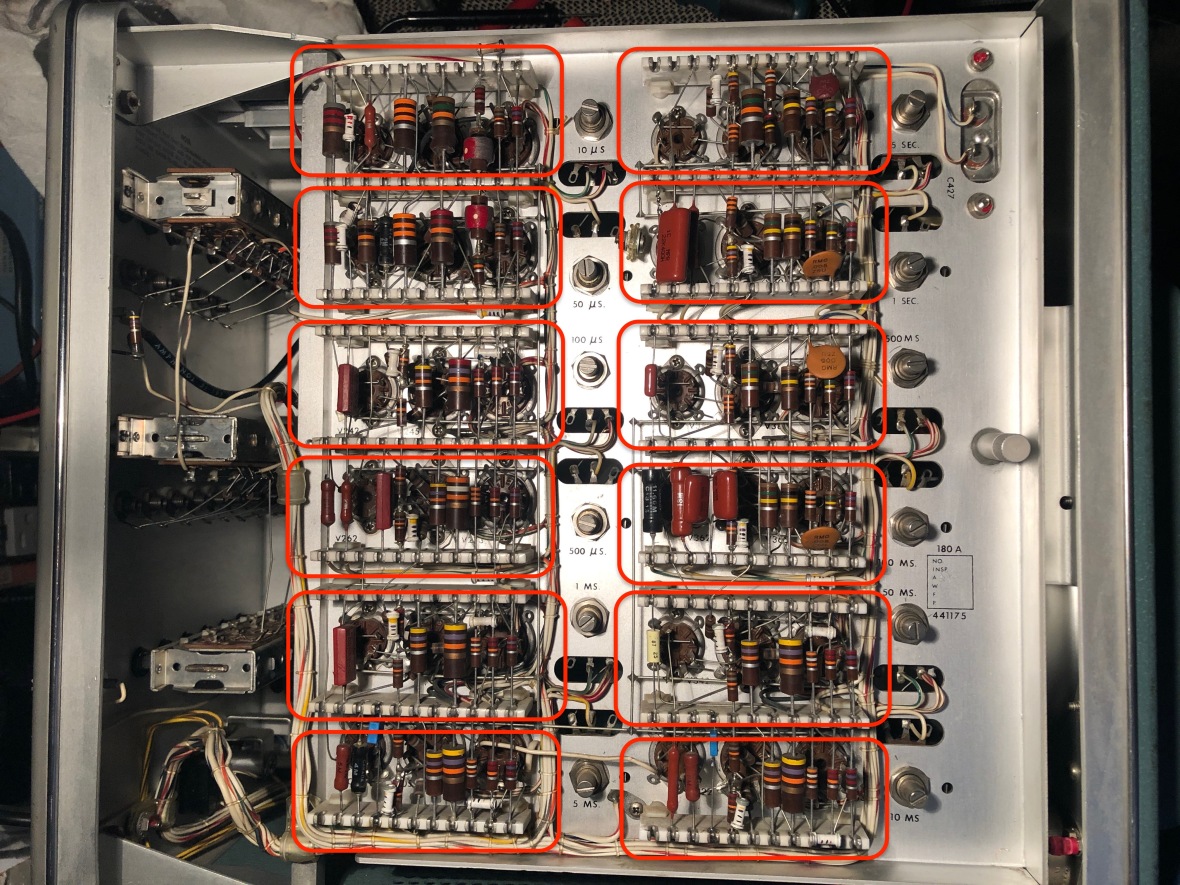 All sections are similar, only major difference being the capacitor value used to adjust the operating time constant. 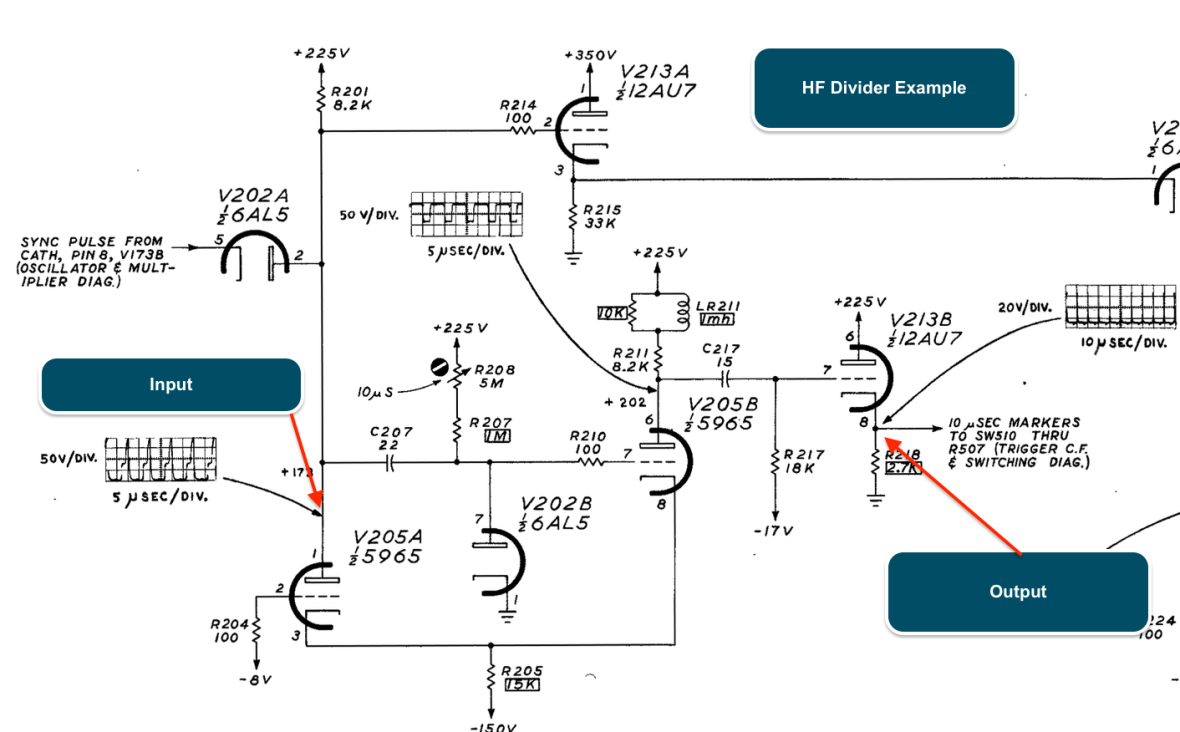 Input for each stage comes in via the 6AL5 diode and output via CF 12AU7. Check the video for signals. 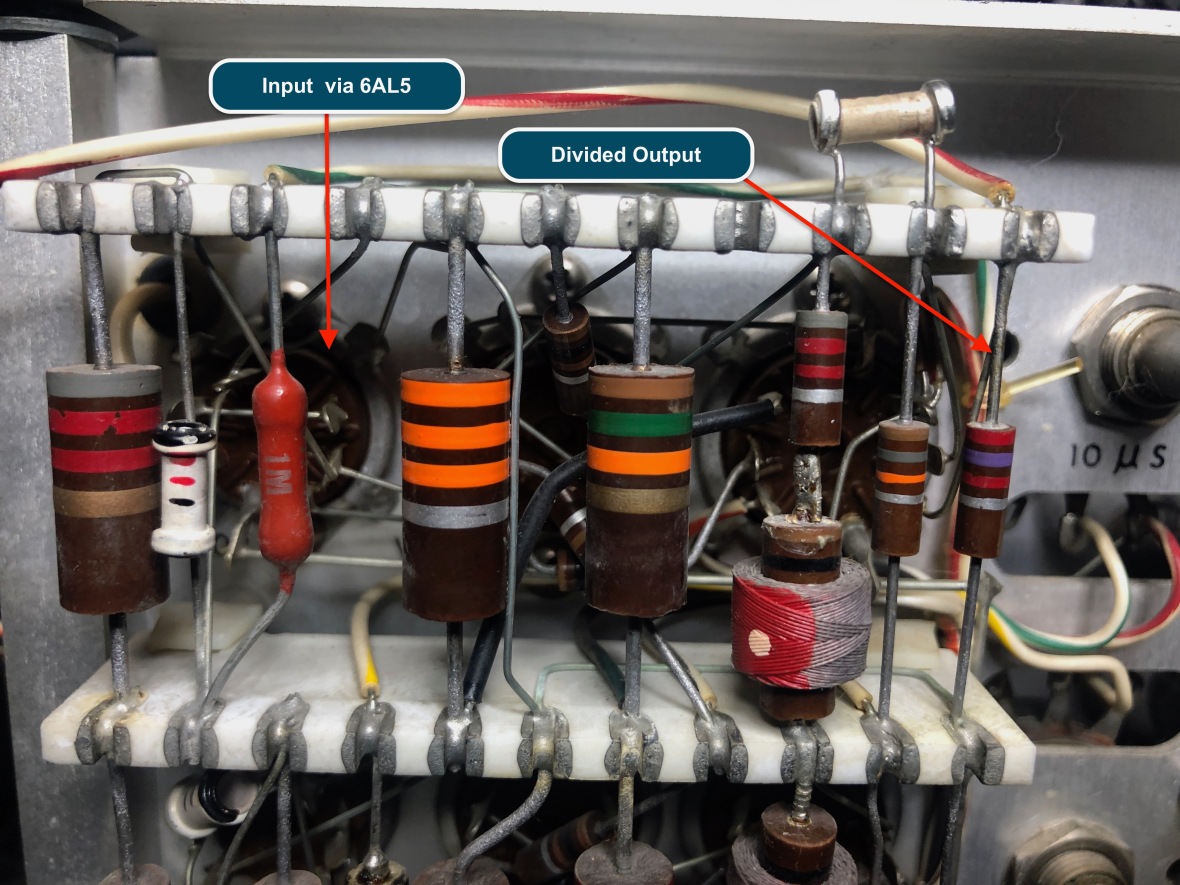 Standard tektronix power supply design with multiple outputs, all referring to  regulated -150V via a 5651 VR Tube.  12B4 as series pass tubes and 6AN8 as comparator/error amp.

Here is the reference -150V supply. Output from rectifier is provided to VR Tube for providing a regulated reference, which is provided to the 6AN8 for comparing it with the output. The difference is used to drive the grids of series pass tubes 12B4 in this case, effectively keeping output regulated. -150V adjust pot is used to control the level of output sampling to the comparator, hence controlling the output voltage. 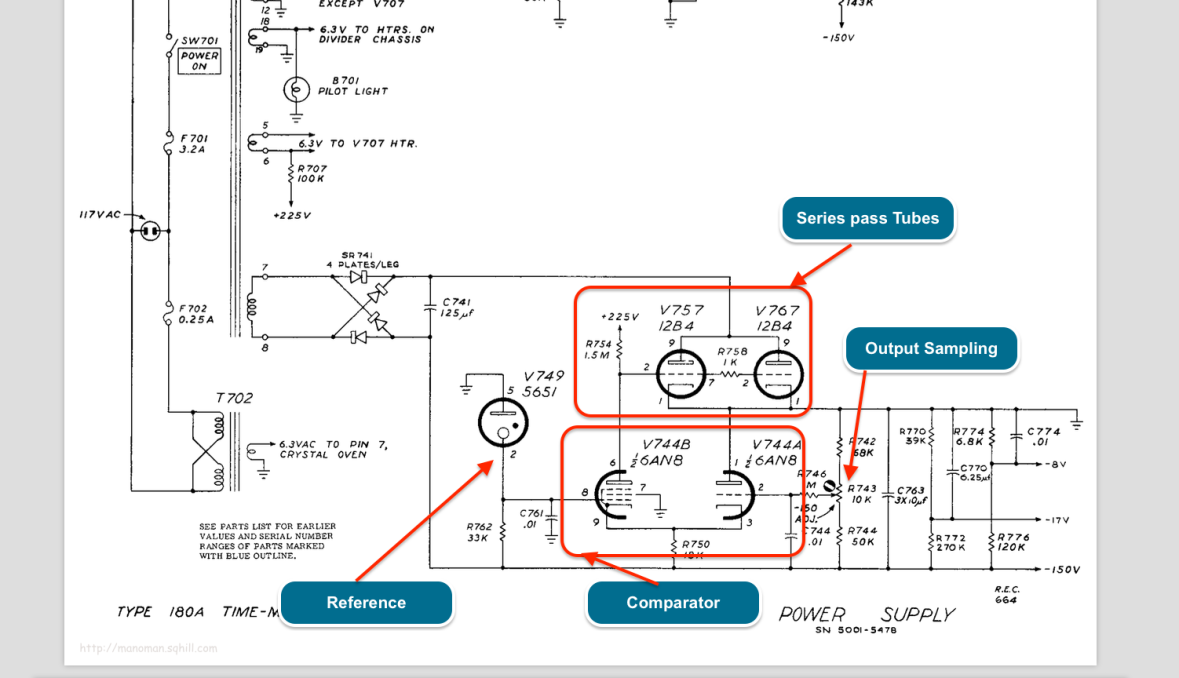 Also for +350V output, the negative leg of the power supply is clamped to +225 rail’s rectifier diode, +ve out, to reduce the turns and output voltage required at +350V section of transformer. The main filter cap is also installed between both effectively reducing the voltage requirement of the filter cap for +350V before regulation.

WARNING: DO NOT TOUCH THE BODY OF THIS  CAP IF IT IS METAL.

Older SN have selenium rectifiers, better to replace them as they can give up anytime.

Any generic silicon diode or standard bridges could be used, Tekspec diodes are 700V PIV.  I  replaced the selenium with a standard bridge rectifier part, W10M.

Remember to add  series resistors when you replace the selenium rectifiers with silicon diodes to compensate for the voltage drop in the former. I picked the values which Tek used when they installed silicon diodes in later SNs, a 10Ω/2W resistor. 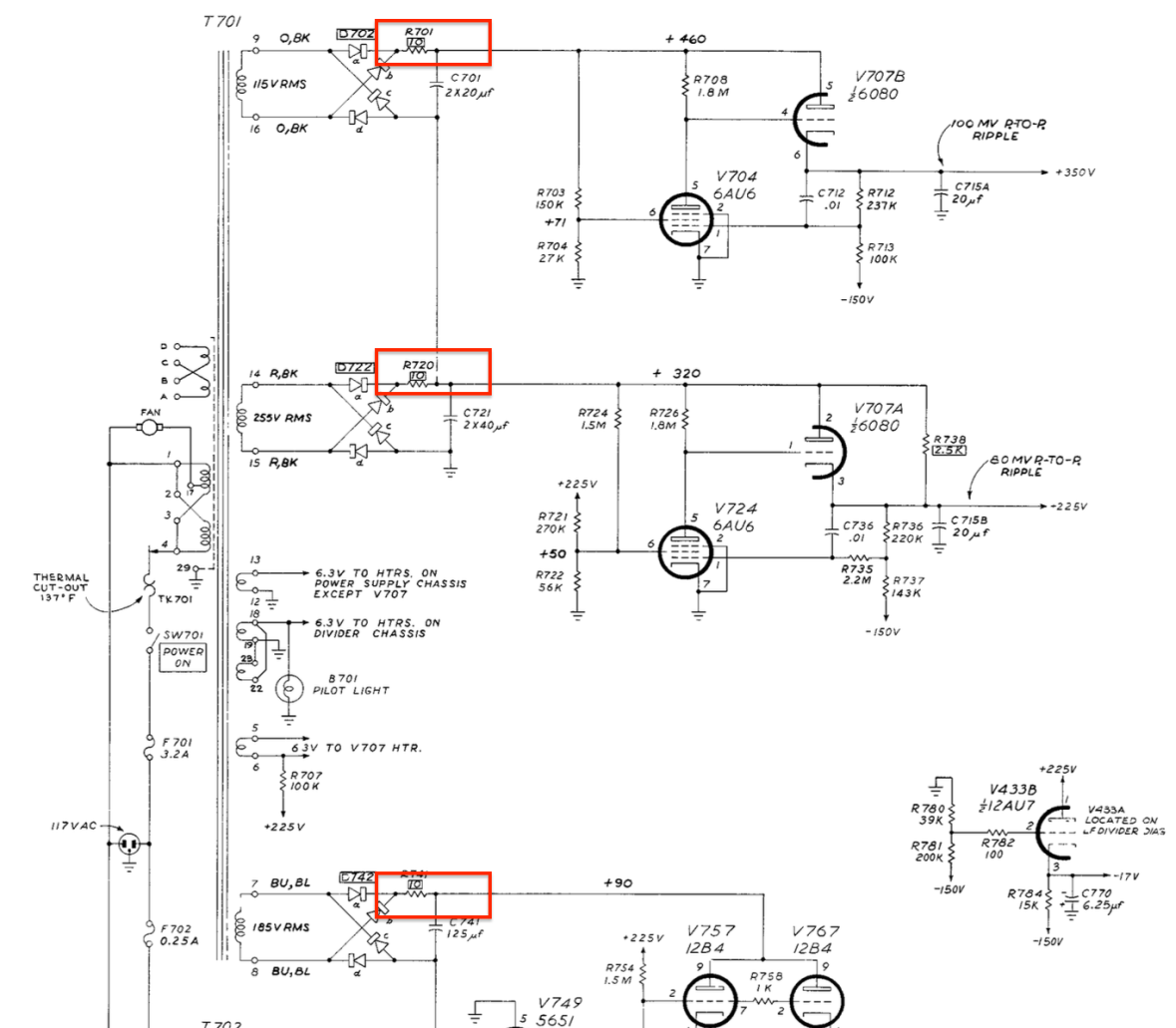 There is a separate transformer for the OCXO heater, which is connected to mains even when the instrument is power switch is off. A standard practice for many instruments with OCXO, excluding HP 3585A spectrum analyzer 😉 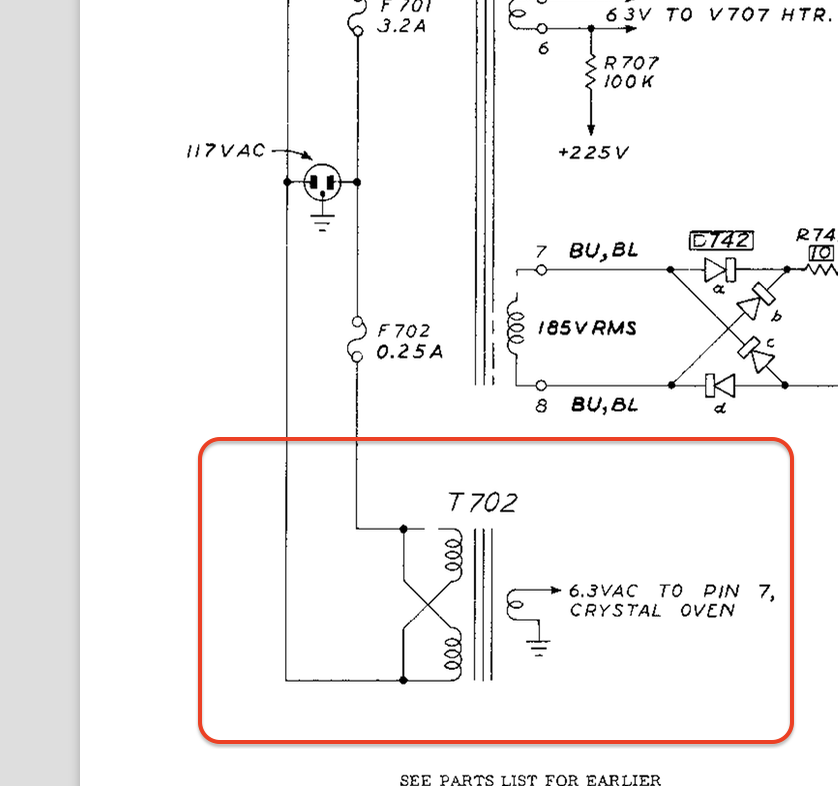 This was an easy one to fix/restore. Not many bad components. Details are covered in the video. Here is the bucket of things which were replaced. Also the selenium rectifier was swapped out with silicon bridge, but left it in the chassis to keep the aesthetics intact. 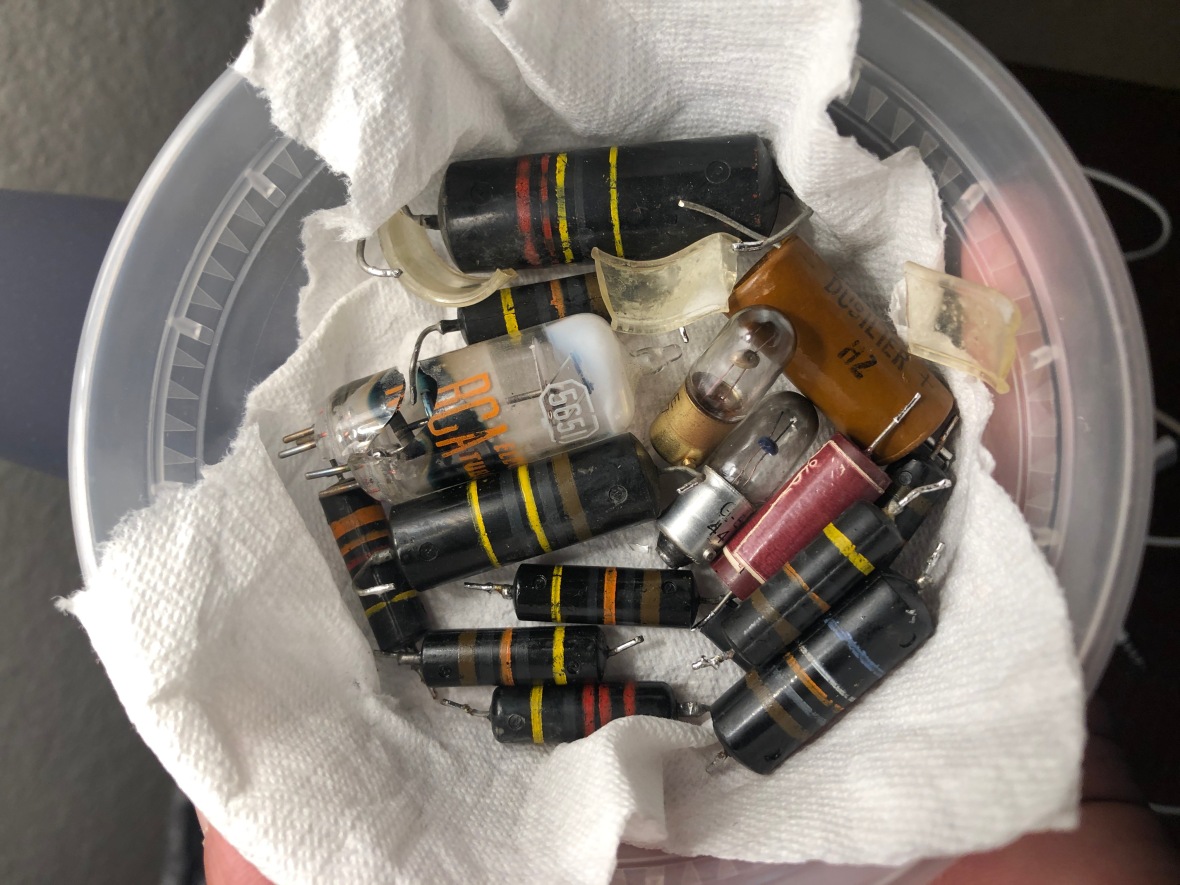 Bumble bees, 5651 VR, pilot lamps, and other few caps. I dont remove the  “Can” type electrolytic from the chassis for aesthetic reasons, so do leave them in and solder the replacement under them.

On electrolytic, reformed some caps, replaced some. Details are in the video. Check my HP 508, Tek 575 blog on Capacitor reforming details.

Do search web for zero beating and other aspects of ham side, like  BFO etc. I  dont want to duplicate information which is already available.

I will explain the zero beating part here.Idea is to tune the ham receiver to any of WWV reference broadcast, say 10MHz for simplicity, then use 180As output as a second source of broadcast, either the 10MHz output or 1μS pulse.Now these two frequencies beat in the receiver and the difference will be heard as a tone at frequencies above 20-30Hz and below 10Hz or so, you can visually see it on the S meter of the receiver. 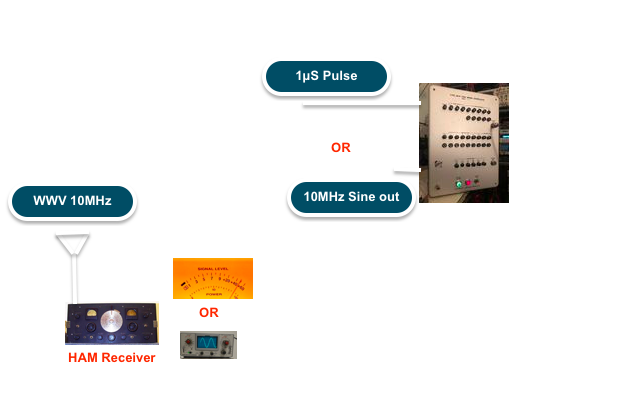 So you  tune the OCXO so that you beat both the outputs and make the difference zero by adjusting the OCXO in 180A, in other words, matching 180A to the reference frequency of WWV.

I have used the 10MHz output from 180A, and it is strong that no antenna wire from the 180A is needed, rather I had to keep the 180A away from the Ham receiver. You could use the 1μS pulse too, it is also derived from the same 1MHz OCXO. Both are using the 10th harmonic of the fundamental OCXO frequency.

For monitoring zero beat, you can use an oscilloscope as mentioned in the manual, or you can use the S meter of the receiver.

Again details are in the video.

Back to home page for more restoration Projects

Disclaimer
I have no commercial affiliation with any of the products/organizations/individuals mentioned in this blog.
The information provided here is for educational purpose only.
You are free to distribute this as long as it stays original with all information as is here and it is free and you don’t scavenge any tubes from any scopes or this blog.

NO electrons were harmed during the repair/filming  of this instrument restoration. All free electrons found inside the unit were  rehabilitated to the nearest vacuum tube.

NO EXTRA SCREWS OR PARTS WERE OFFICIALLY FOUND AFTER REASSEMBLY. UNOFFICIAL EXTRA ITEMS WERE DISPOSED OFF SECRETLY AND DECLARED AS “EXCESSIVE ASSEMBLY” DURING MANUFACTURE.

Please do report any errors or stupidity.